Judge us by the company we keep!

The Federated Garden Clubs of Connecticut, Inc. is proud to have many organizations affiliated with ours.  All excellent organizations, they share our commitment and passion for advancing our mission.

The Beardsley Zoo – 100 Years of History

Connecticut’s Beardsley Zoo celebrated its 100th anniversary this year and the party has been ongoing all year with special events like the Bird show with Falconer Brian Bradley highlighting raptors and other amazing birds. There was a birthday bash held in June, which included a bake off from local bakers and the placement of a time capsule in the Big Cow. The Big Cow also got a much-needed facelift. The party continues with the Lantern Festival in the fall, which is a Glow Wild event happening September to November. It is a “journey through a wonderland of illuminated larger-than-life lanterns inspired by our wild world.”

The history of the Beardsley Zoo began in 1878, when James Beardsley, a wealthy cattle dealer, donated over 100 acres to the City of Bridgeport. In 1884, the City contracted noted architect Frederick Olmstead, who was responsible for New York’s Central Park, to create a design for Beardsley Park. In architect Olmstead’s words, “The want of Bridgeport is a simple rural park.” What Mr. Olmstead hadn’t figured into his “simple rural park” was the fact that Bridgeport, Connecticut, was also home to a certain Mr. Phineas T. Barnum and his world-renowned circus. It was P.T. Barnum’s habit to exercise his animals from time to time along the streets of Bridgeport, and so it was not unusual to find zebras or camels taking a stroll through Beardsley Park.

Perhaps it was with this inspiration that Bridgeport Parks Commissioner Wesley Hayes started a campaign in 1920 for a City Zoo to be founded within Beardsley Park. Commissioner Hayes put a plea to the citizens of Bridgeport to contribute animals to begin the menagerie and in that first year 18 exotic birds made their home at the Park. Barnum and Bailey Circus also donated some animal “retirees” and soon Connecticut’s Beardsley Zoo was on its way to becoming a statewide attraction. It was officially established in 1922.
.
As time passed, Connecticut’s Beardsley Zoo became one of many modern zoos that recognized the importance of conserving our wildlife and our wild places, using our unique facility to breed endangered species while at the same time, fascinating as well as educating the public on the beauty and interdependency of our natural world. Beardsley Zoo received its first accreditation by the American Zoo and Aquarium Association (now known as the Association of Zoos and Aquariums, or AZA) in 1987 and continues to be a part of this important nationwide conservation organization.

One of the original buildings, the enduring central figure in the zoo is the historical Victorian Greenhouse. It has continued to be a thriving place of plant diversity and the koi pond always offers a relaxing moment while visiting the zoo. In the 1980’s Bridgeport Men’s Garden Club helped keep the greenhouse green and the grounds operating after the City of Bridgeport eliminated the greenhouse staff. The zoo now employs fulltime Greenhouse staff and groundskeepers. In September of 1998, more than 200 volunteers from GE developed a sensory garden behind the Greenhouse, created pathways, added a gazebo and some benches, and prepared beds for planting. The “green staff” is very involved in cultivating plants from our animals’ wild habitats. Some examples may be seen with the animals in their habitats while others may be viewed in the Greenhouse. Many of the plants are endangered just like the animals. The specialty gardens found on the grounds include the sensory gardens, a butterfly garden, organic vegetables, and lots of pollinator gardens. The Victorian Greenhouse and the Rose Arches historically have been very popular for the perfect event photo op.

The Victorian Greenhouse is also one of the most popular venues for weddings and Bridal Showers — ”You can say I Do at the Zoo.” With its lush greenery and grand buildings, the zoo provides a lovely backdrop for any special event. Guests can dine while mingling with the exotic animals from North and South America. Corporate events and birthday parties are also held here often.

One thing the zoo has always depended upon and continues to cultivate is a large volunteer force designated as Zoo Friends, Zoo Gardeners, Zoo Docents, Interns, the Conservation Discovery Corps, Zoo Career Explorers and a whole host of corporate volunteers who make time annually for special projects or routine duties. It was volunteers who kept the Greenhouse green and our volunteers are as important today as they were when this Connecticut treasure was first founded. 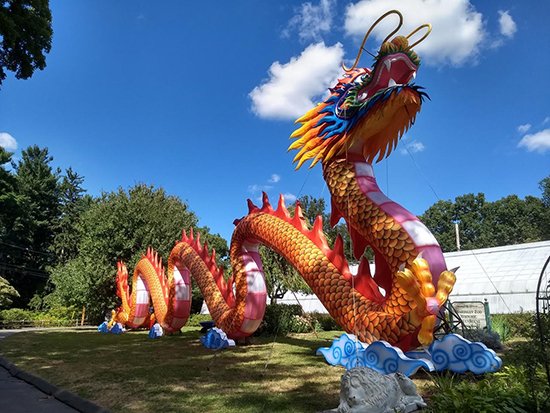 We hope your organization will consider joining our family of affiliates. The annual fee is minimal. Membership will further advance and enhance your visibility throughout Connecticut and beyond.
Affiliate Membership Benefits:

To become an Affiliate, contact Secondvicepres@ctgardenclubs.org and/or complete the application form.

Affiliate Members of The Federation