Deck the Halls (with Holly!)

Deciding what to write can be a torturous task. As you may have noticed, I like to explore the often overlooked parts of the garden world. This time however, I decided to be conventional (yawn) and chose the most obvious plant for December, holly.

Sounded like it would be easy but nope, I soon found that Ilex is a very large genus. Even narrowing it down to the major ornamental species that thrive in Connecticut, left way too many plants. There are natives species: Inkberry (I. glabra), American holly (I. opaca), and winterberry (I. verticillata). Then there are the non-native species: Japanese holly (I. crenata) and the myriad hybrids. Ironically, the species that epitomizes Christmas, English holly (I. aquifolium) with its deep green, vicious spiny leaves and red berries, is marginally hardy to zone 6b. Not relevant for those of us up in the hills.

To keep this article from being unbearably long — we all have holiday shopping to do — I decided to focus on the non-natives species. Yes, yes, I know this will offend the nativists but, as we are steeped in the European holiday tradition, it’s only fair. No one ever sang “deck the halls with boughs of winterberry”. And as it all traces back to the Druids who believed that holly offered protection against evil spirits, evergreen holly with red berries it is.

Big animal picture … these evergreen hollies prefer sun with some moderate shade tolerance, prefer acidic soil, don’t like it too cold or too hot but in general, they aren’t overly fussy. One notable characteristic of holly is that it is a dioecious plant which means the male and female reproductive parts are on separate plants. The flowers are white and not of much interest unless you are a bee, in which case you are happy to gather the pollen of the male flowers. Any male plant can pollinate any female plant IF the flowering time overlaps. Most holly plants are paired (boy & girl) to ensure that happens. If it does, the resulting fruit is botanically speaking a drupe – not a berry – but I will just call them berries.

The freewheeling exchange of pollen is why there are many hybrid hollies which are crosses of different species. It is these hollies we will explore here starting with the Blue or Meserve hollies. Here is a great story of a woman in horticulture. Kathleen Meserve, an enthusiastic 20th century amateur gardener on Long Island, wanted to create cold hardy hollies with red berries. She crossed a Japanese species (Ilex rugosa) with the English holly and created a hybrid called Ilex x meserveae which is hardy to Zone 4. The foliage of this hybrid is so dark green it looks bluish, thus the name, Blue Hollies. There is ‘Blue Prince’, ‘Blue Boy’, ‘Blue Stallion’, ‘Blue Princess’ and ‘Blue Maid.’ You need one male for every four to five females to get a bumper crop of red berries. Cultivars vary in size but, by and large, they are sizeable shrubs growing to 5 – 12 ft. tall and 6 ft. or more across. They can be used as a foundation plant if you don’t mind pruning. Luckily they take to pruning very well and also make awesome hedges (take that, boring Arborvitae).

Ms. Meserve continued her matchmaking and crossed Chinese holly (I. cornuta) and English holly producing ‘China Boy’ and ‘China Girl’ (Ilex x meserveae ‘Mesdob’ & ‘Mesog’). They have a rounded, dense form growing to 7-10 ft. tall by 5-8 ft. wide. They too are hardy to Zone 4.

hollies were trademarked with “Castle” names. They are smallish for hollies, hardy to zone 5 and best of all, way less spiky with softer deep green foliage. ‘Castle Spire’ (I. x meserveae ‘Hachfee’) has bright red berries, dark glossy foliage and a narrow, pyramidal form reaching 8 – 12 ft. tall and 3 – 4 ft. wide. The male, ‘Castle Wall’ (I. x meserveae ‘Heckenstar’) is a bit shorter at 5 – 8 ft. tall. An even shorter guy is ‘Castle Keep’ at 3 – 5 ft. tall and wide; he has a rounded habit that needs no pruning to keep it shape.

Then there is my favorite, ‘Dragon Lady’ (Ilex x aquipernyi ‘Meschick’), a cross between English and Perny holly (I. pernyi). She is a looker with a narrow pyramidal form, 20 ft., tall but only 4 – 5 ft. wide. She has the deeply spiked, glossy leaves and bright red fruits of her English parent in a hardier, leaner package. Also on the smaller side is ‘Red Beauty’ holly (I. ‘Rutzan’) who hails from Rutgers University and is a cross of Blue and Perny holly. She is the same width as ‘Dragon Lady’ but half the height at 7 – 10 ft. tall.

Lastly, the grand dame of the hybrids is ‘Nellie R. Stevens,’ a cross of English and Chinese holly. She is monumental and will quickly reach a mature height of 15 – 25 ft. and width of 8 – 15 ft. She tolerates drought, air pollution, and heat but is only cold hardy to Zone 6. She will produce large, bright orange-red berries without a male pollinizer but a male Chinese Holly will increase the berry set. 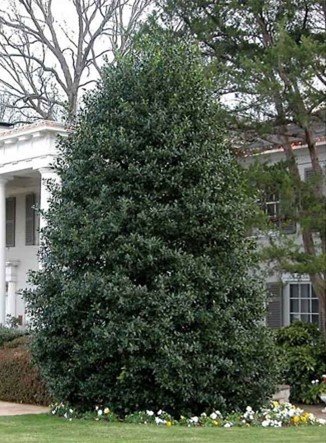 Beyond being decorative, hollies provide protection for nesting birds and the flowers, though small, are loved by pollinators. In Celtic mythology the revered holly tree is considered the evergreen twin of the oak. The oak is the controller of the light half of the year and the holly controls the dark, winter months. Happy winter solstice!